Posted on April 28, 2011 by ninthwavedesigns

There is a new gallery page on the SPS Form Plaque Project blog featuring a slideshow of images featured in blog posts.  You can access this page through the “Gallery” tab at the top of the site, or by clicking HERE.  I will be updating the gallery regularly as new photos become available, so check back to see what is new.

The Carving Process: Roughing Out

Posted on April 20, 2011 by ninthwavedesigns

The next stage in the carving process involves roughing out the pattern and removing the larger areas of wood so that the form begins to emerge.  In this photo you can see that the basic shape of the head and neck are in place, and I have begun to work on the curve of the wing.  A few of the feathers leading from the body into the wing have been roughed out to help define the flow of the transition into the curve of the wing. 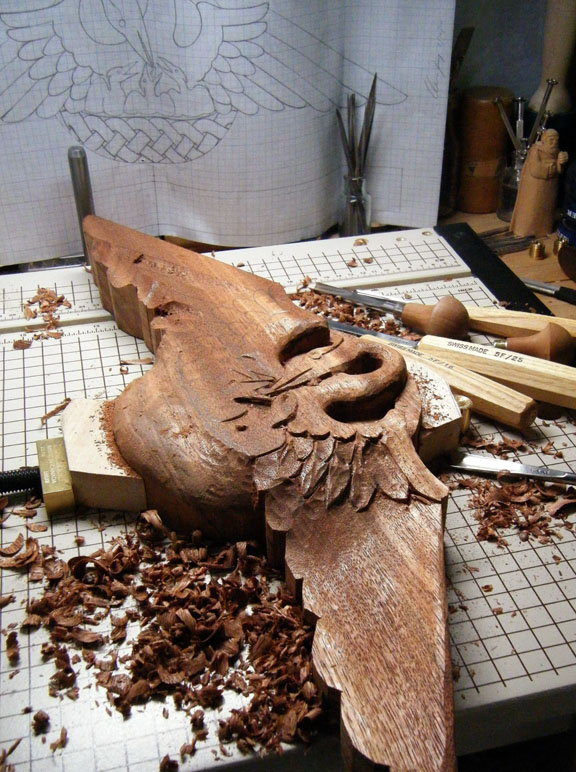 In this image you can see the rough shape of the nest and the begining of the outline of the pelican chicks.  The opposite wing still need to be roughed out, and once I have the inside curve of both wings completed I will work from the back to finish giving the wings their shape.

Roughing out is usually done with larger carving tool profiles using a mallet.  I started with large gouges to remove the greatest portion of the wood, and then work down to smaller profiles to smooth it to the finished rough form.  The roughing out stage  can be a little awkward as you transition from the clean outline of the pattern to the rough form of the carving.  It can be hard to resist the urge to begin refining areas as you get them to a good roughed out point, but it is important to rough the entire form out to the same degree before beginning on the detail.

As I mentioned earlier, this particular piece of wood came from a selection of wood that has been stored in barns at SPS going as far back as the early years of the 20th century.  Although it is impossible to know how long this piece of wood has been at the school, I did find out a little more information about it.  After an informative tour of the boat house and the workshop, Mr. Bailey (who maintains and restores the crew boats at  SPS) showed me the collection of wood stored there for use in repairing and restoring the crew boats.  This wood is a type of mahogany called Spanish cedar.  This is a deceptive name, since it isn’t from Spain, and it isn’t a type of cedar, but this resinous wood  has a wonderful aroma, and is highly resistant to rotting in water.  Spanish cedar has been long used to make cigar boxes and for the lining of humidors, as well as for making boats.  So the piece of Spanish cedar I am using for this carving was very likely purchased by the school at some point for use in building and repairing the rowing boats – a tradition at SPS that goes back to the 1870s.

Posted on April 4, 2011 by ninthwavedesigns 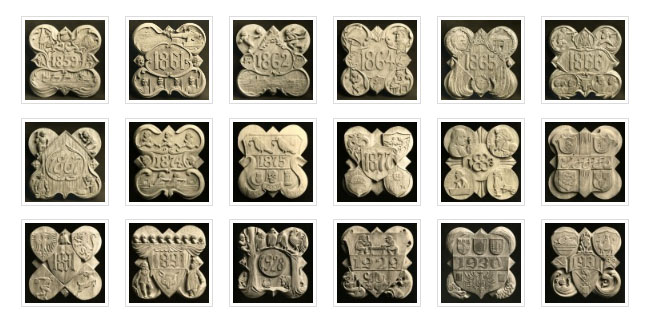 The Ohrstrom Library Digital Archives website is now offering an online exhibit of  photographs of Form plaques from the SPS Archives entitled:  The Form Plaques of St. Paul’s School: John Gregory Wiggins.   The exhibit is described on Ohrstrom Blog:

Eighteen images have been selected as the focus of the exhibit. Each image includes a description of the symbols employed in the plaque design and is written by the carver of the plaques, John Gregory Wiggins.  In addition to the individual entries in the exhibit you can take a quick overview of the plaques by viewing a slideshow of the images. The exhibit offers a great introduction to this School tradition, and helps to decipher some of the interesting imagery used to depict aspects of St. Paul’s School history.

There are a total of forty-two Form plaque images now on OLDA which can all be seen by clicking HERE.

A more detailed description of the history of the Form plaques and the work of John Gregory Wiggins can be found HERE.

Both of these links provide a great introduction to the types of imagery used in the early Form plaque designs, and browsing through the exhibit as well as the individual entries will be a helpful reference source for students in developing themes and design concepts for future plaque designs.