Posted on February 7, 2014 by ninthwavedesigns 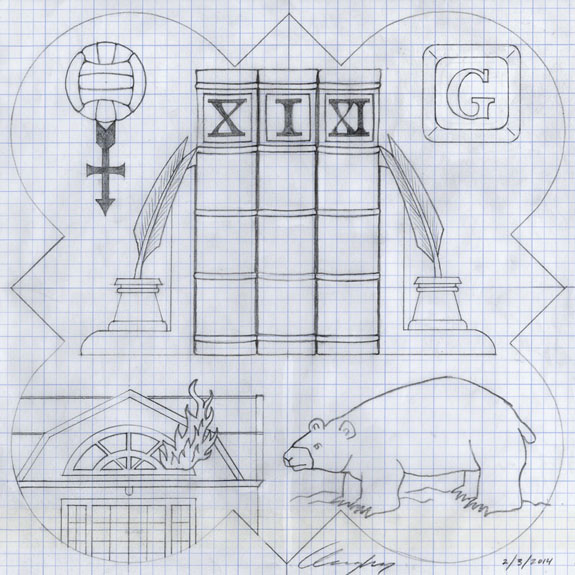 The design stage is complete for the 1999 Form plaque. I worked with members of the Form of 1999 to come up with a list of events, and the following was chosen to be featured on the plaque:

I will now begin working on the carving process, with the plan to have the finished plaque to present at Anniversary weekend in June this year. Photos of the process will be posted on the blog, so stay tuned for more information!

Posted on June 1, 2013 by ninthwavedesigns

Here is a photograph of the completed plaque for the Form of 2008. It was dedicated on June 1, 2013 and hangs in the Middle Dining Hall of Coit (The Upper) above the panels that contain the names of all the members of the Form of 2008. Below the photo is the description of the elements incorporated in the plaque design.

The 2008 economic recession is represented in the central image by a very grumpy bear holding a stock market chart with a downward-pointing arrow – a reference to the sharp down-turn of the market during that time. The boys’ varsity squash team won the New England Championship, and this event is represented by the two crossed squash racquets behind the bear. 2008 saw the end of the use of lunch trays in the dining hall and this is represented by the SPS monogrammed tray located to the left of the bear. Opposite the tray on the right of the bear is a SPS Waffle, representing the new waffle iron that was acquired in the dining hall that features the SPS shield. The winter of 2007/2008 produced record amounts of snow and ice. To represent the wintery weather conditions in Millville the background behind the bear shows the snow-covered School grounds, including a layer of ice beneath his feet.

Posted on April 1, 2013 by ninthwavedesigns

The Form of 2008 plaque is now complete.  The above photograph shows a sample of the color finish on the plaque, the top center element featuring the very grumpy looking stock market bear.

The completed framed plaque will be revealed on Anniversary Weekend on Saturday June 1st – at which time photographs of the finished plaque will be published online.  Thank you to the representative from the Form of 2008 for your help with this project –  I am looking forward to seeing members of the Form of 2008 at the SPS Anniversary event to celebrate your new Form plaque!

Posted on March 2, 2013 by ninthwavedesigns 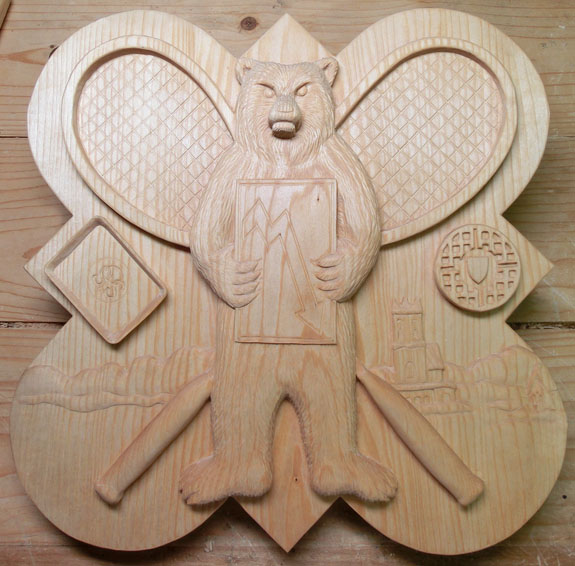 Above is a photo of the completed carving for the 2008 Form plaque.  The carving has been sealed with an oil finish and is ready for the painting process to begin.  The photos below show details of the finished carving:

The central design represents the 2008 recession with a bear holding a chart with an arrow representing the dramatic down-turn the bear market took. Here is a detail of the very grumpy looking bear. 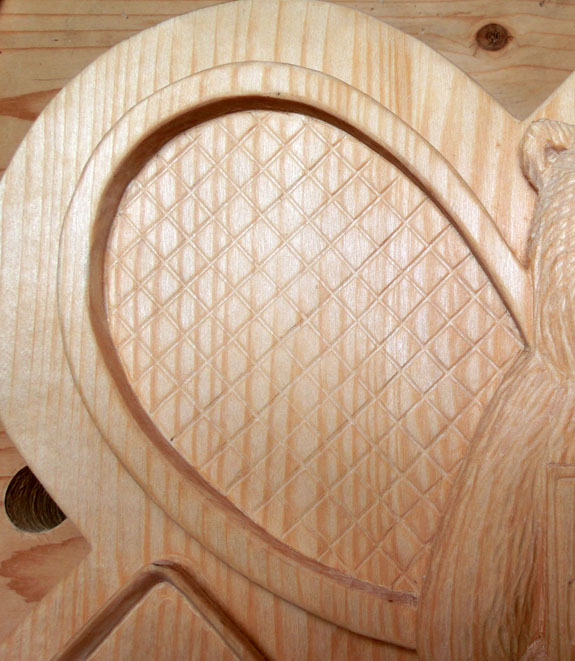 In the background two crossed quash racquets represents the boys’ Varsity Squash Team winning the New England Championships. Shown above is a detail of one of the racquets.

On the left of the bear is a tray with the SPS monogram representing the end of using trays in the dining hall – an effort that significantly saved resources and cut food waste.

To the right of the bear is a SPS Waffle, representing the new waffle irons in the dining hall that feature the SPS Shield. Below the waffle is a detail of the winter scene of Millville covered in snow – representing the record snowfall that winter.

I will now begin the painting process for the 2008 plaque.  Check back soon for a sneak peek at the finished product!

Posted on January 21, 2013 by ninthwavedesigns 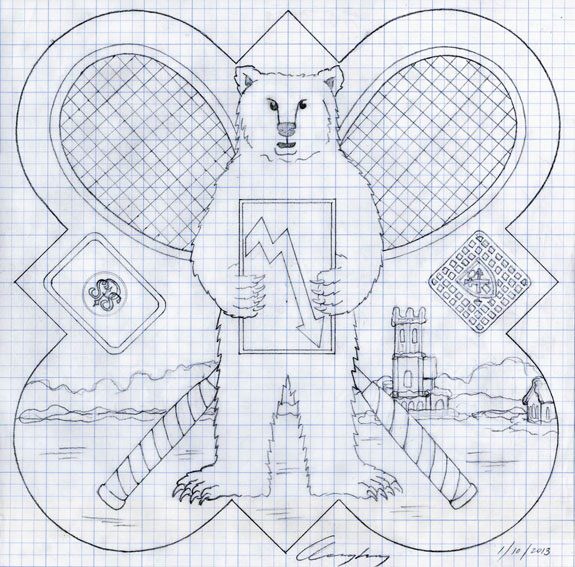 The design stage is complete for the 2008 Form plaque. I worked with members of the Form of 2008 to come up with a list of events, and the following design elements were chosen:

I began roughing out the carving over the weekend and will be posting photos of the carving process over the next few weeks. 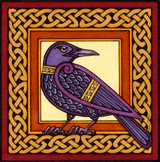