Posted on June 1, 2013 by ninthwavedesigns

Here is a photograph of the completed plaque for the Form of 2012. It was dedicated on June 1, 2013 and hangs in the Middle Dining Hall of Coit (The Upper) above the panels that contain the names of all the members of the Form of 2012. Below the photo is the description of the elements incorporated in the plaque design.

The upper left corner of the plaque features an open book with the initials MGH carved onto the pages, representing the beginning of the Rectorship of Michael Gifford Hirschfeld, Thirteenth Rector of St. Paul’s School. The book symbolizes the Rural Record, a journal of day-to-day life that was kept at St. Paul’s School from 1857 into the early 20th century. The upper right corner shows the symbol for the Delphians – the Greek letter Delta surrounded by a laurel wreath – winners of the Club Cup competition for the School year. The upper center of the plaque has the World Trade Center towers and in the middle left section the date 9/11/11is carved – marking the tenth anniversary of the September 11th terrorist attack. A snowman holding a Jack-o-lantern is carved in the lower right corner of the plaque, representing the big snowstorm on Halloween – the only significant snowstorm of the winter season. To the left of the snowman is the newly constructed Lindsay Center for Mathematics and Science, dedicated on November 29, 2011.

Posted on October 26, 2012 by ninthwavedesigns 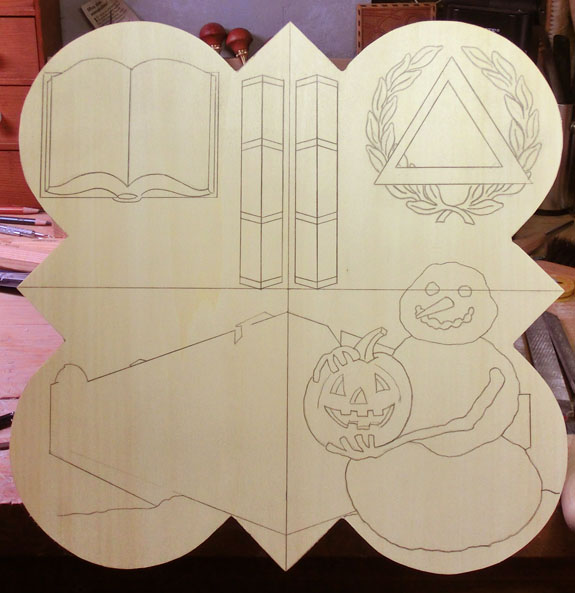 This first photograph shows the design layout on the plaque blank, with outlines in place as guides for roughing out the background. 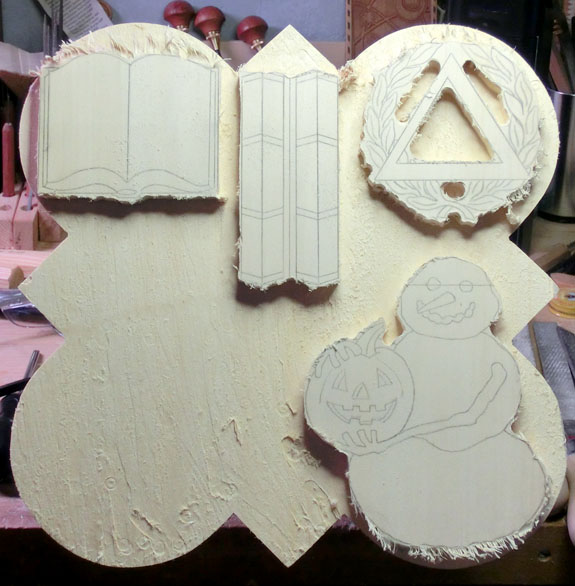 This shows the plaque after being roughed out with a small format router.  This sets an even depth for the background of the plaque. From this point forward all the carving is done using hand tools.

A big jump to the finished carving – after many, many hours of work the fine details are all in place.  I first carve the rough shapes for the entire design and then refine each element to its finished state. 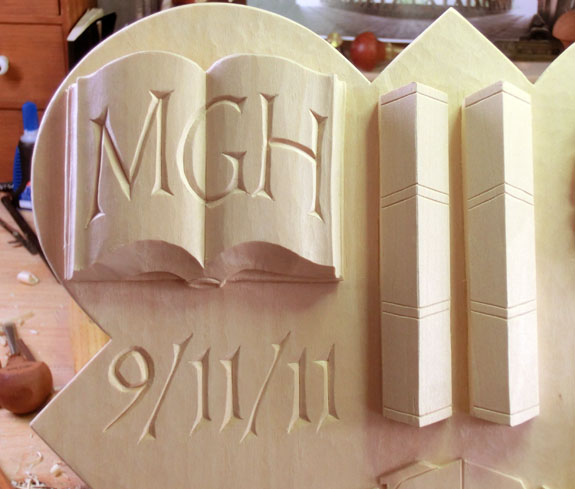 This detail shows the book with Mr. Hirschfeld’s initials – marking the beginning of his Rectorship.  The World Trade Center towers are on the right of the photograph with the 10th anniversary date of the 9/11 terrorist attack.

This detail shows the Delphian symbol – winners of the Club Cup for the 2011/2012 School year.

The Lindsay Center for Mathematics and Science is shown in this detail.

The snowman and Jack-O-lantern representing the Halloween storm that blanketed Millville in deep snow.

The next stage in the process involves sealing the plaque with oil and then painting it and adding the protective finish.  The next time you will be able to see the plaque will be Anniversary weekend at the beginning of June of 2013.  I’m looking forward to finishing the plaque and sharing it with all the members of the Form of 2012!

Posted on September 9, 2012 by ninthwavedesigns

The design stage is complete for the 2012 Form plaque. I worked with members of the Form of 2012 during the previous School year to come up with a list of events, and the following was chosen by them to represent the 6th Form experiences of the Form of 2012:

I will now begin working on the carving process, with the plan to have the finished plaque to present at Anniversary weekend in June this year.  Photos of the process will be posted on the blog, so stay tuned for more information!

The following photos show the progress so far on the Form of 2011 plaque. The photo above shows the design outline transferred onto the plaque blank.  Just the major design elements are transferred at this point.

The photo above shows the plaque after the background has been removed using a small format router.  This very rough stage is smoothed over using carving tools, and the outlines are then cleaned up and refined.

Here is a photo of me adding some of the initial detail to the plaque design – the laurel wreath around the Delphian Delta is starting to take shape. 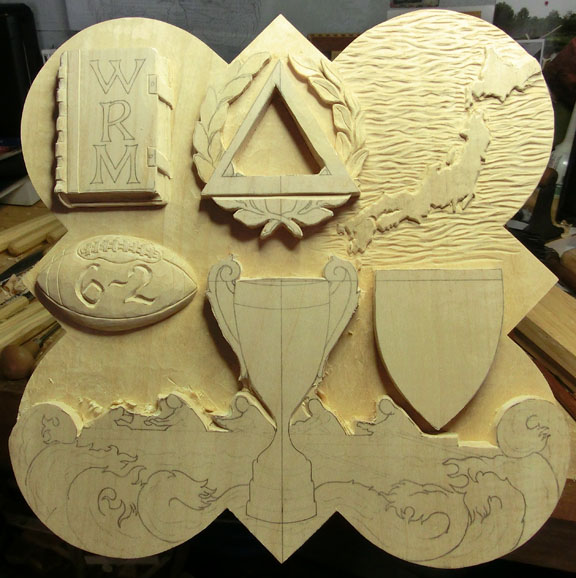 In this photo you can see the finished football center left, and the map of Japan top right.  The book with Mr. Matthews’ initials is almost complete at this stage.

More details need to be added and the lower section needs to take shape, so there is still quite a bit to be done before this carving is complete.  I will update with more photos soon.